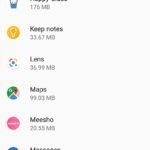 Google's android is now the most popular OS as far as I know. There are also other OS like Apple iOS, Symbian, Blackberry OS etc. But Android has covered most of the market in the world. Android is very popular but has some drawbacks as well. Like sometime its apps stopped working. These apps may be third party apps or Google's own apps like Google map. Google map … END_OF_DOCUMENT_TOKEN_TO_BE_REPLACED

Roboniqe.com is a participant in the Amazon Services LLC Associates Program, an affiliate advertising program designed to provide a means for sites to earn advertising fees by advertising and linking to Amazon. This site also participates in other affiliate programs and is compensated for referring traffic and business to these companies.